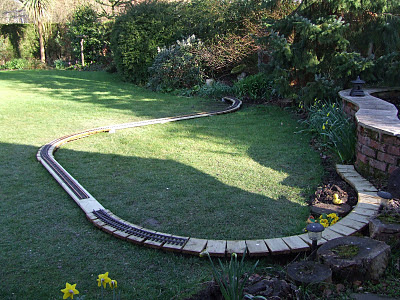 Back in Spring 2009, the creation of Homestyal Light Railway began.  Here follows the method that I used for the construction of the trackbed.

Most of my garden is relatively level so building the track bed wasn't too difficult as it only had to vary between two to four inches above the existing terrain.

Using LGB R3 (16000) curves and straight sections as templates I was able to construct the trackbed with tanalised decking planks supported on light weight breeze blocks positioned at regular intervals.

Most sections of curve were represented by two R3 (16000) pieces whereas each straight section was made from various lengths, all divisible by 300mm (10000). 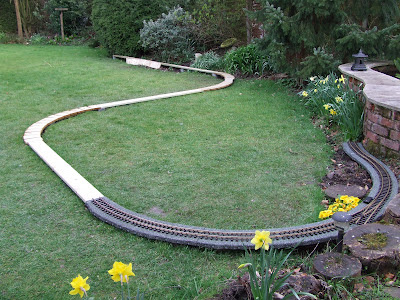 Once the decking planks were in position each individual section was covered in heavy grade mineral roofing felt. This would both protect the wood from the elements and provide an initial surface for the track to adhere to prior to the ballast being laid. 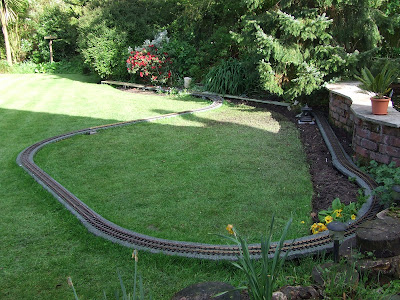 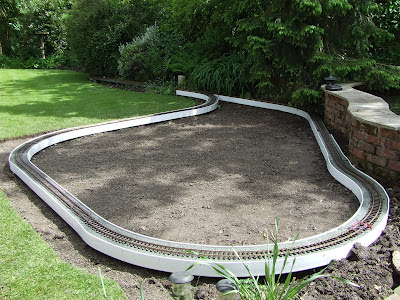 The track bed was fitted with a 95mm x 6mm uPVC edging strip which would provide additional protection to the wood, allow future cabling to be routed and form a boundary for the 20mm green slate chippings. The strip sits approx 8mm above the felt (same height as the sleepers), which will allow for ballast (grit) to be laid in between and around the sleepers whilst preventing the ballast from spreading. 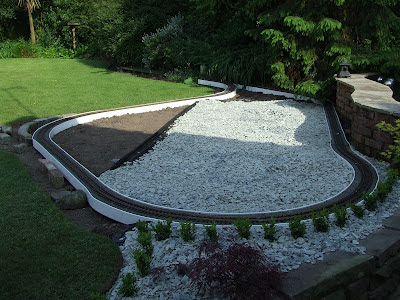 Before the chippings were put down a weed barrier membrane was laid to prevent weeds from re-appearing. The slate depth varies between 50mm and 80mm. In the foreground are small Boxus plants which in time will form a dwarf hedge. 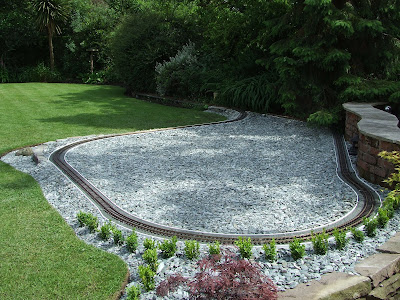 With the laying of the chippings complete - the home loop awaits the introduction of ornamental grasses and monoliths and of course, HOMEstyal Halt Station. 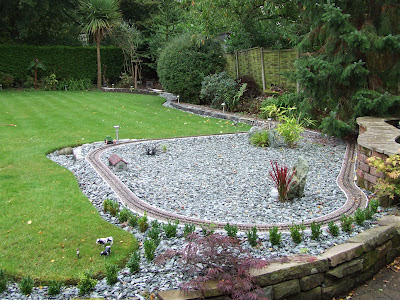 Ornamental grasses, monoliths and a temporary location for HOMEstyal Halt Station complete the construction of the home loop.

Posted by The Controller on Saturday, December 31, 2011 No comments:

With the Radio Control equipment fitted, setting and adjustment of the regulator is best achieved with the locomotive 'in steam' and on blocks to raise the wheels off the ground.
Once full working pressure is raised, the transmitter and receiver were both switched on.
The regulator arm was adjusted until the transmitters 'stick' was in the half way position as the wheels began to rotate.
The movement and settings of all linkages can be seen in the above video.
Posted by The Controller on Wednesday, December 28, 2011 No comments:

The receiver was first fitted underneath the cab floor and all wires connected.
Then the linkages and adjustments were made to connect both the regulator and reversing mechanisms to their respective servos. 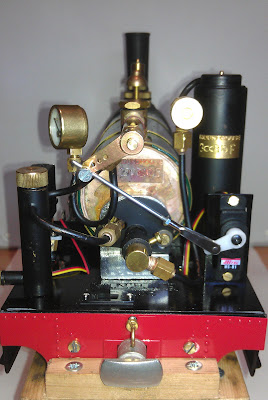 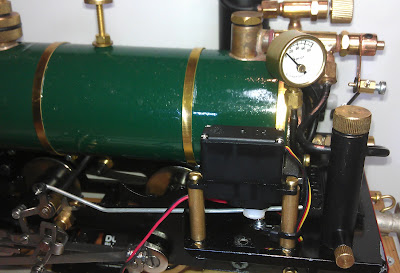 Fine tuning of the regulator is now required and for this, a full working pressure was raised.
Next stage, the replacement of the cab with a battery box fitted to the underside of the roof.
Posted by The Controller on Sunday, December 18, 2011 No comments: 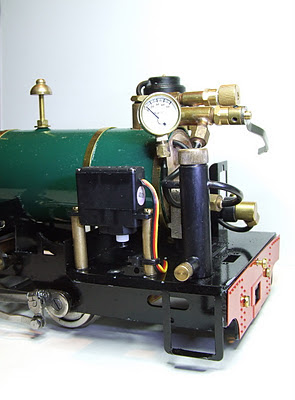 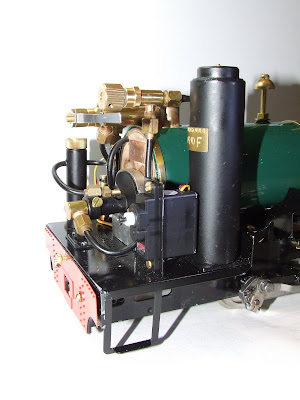 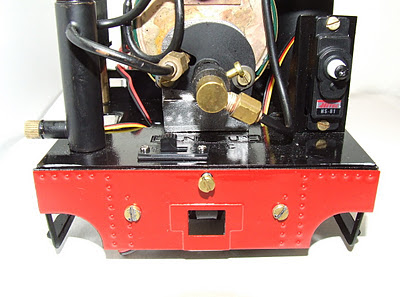 
Next stage, fitting and adjusting linkages.
Posted by The Controller on Thursday, December 01, 2011 No comments: 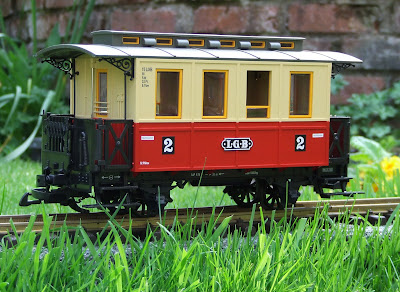 In addition to the 'Stainz' locomotive, each Passenger Starter Set comes complete with two passenger coaches in both red & cream and blue & cream. 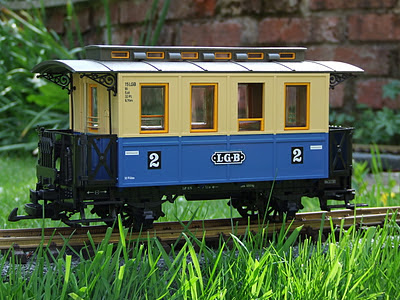 Posted by The Controller on Sunday, November 27, 2011 No comments:

Billy goes for another run

Now with the cab fitted, Billy has a quick run before returning to the workshop for her radio control to be fitted.
Posted by The Controller on Wednesday, November 23, 2011 No comments: 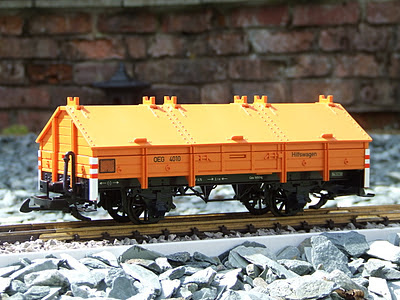 With covered hinged hatches, this wagon is modelled after the cars seen on the Upper Rhine Railway.  This type of car is used as a work car to carry moisture sensitive freight.
Model: Each of the six hatches open independently of one another.
Length: 300mm LGB: 44110
Posted by The Controller on Wednesday, November 23, 2011 No comments: 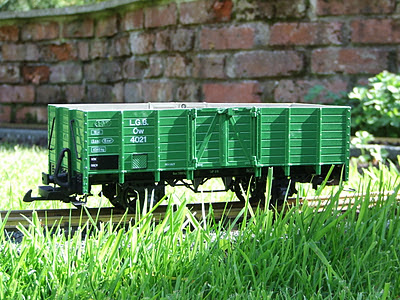 Many high sided (seven plank) open wagons were used on the narrow gauge lines of the DR.
Model: The double doors on both sides of the wagon open outwards.
Length: 300mm LGB: 4021
Posted by The Controller on Monday, November 07, 2011 No comments: 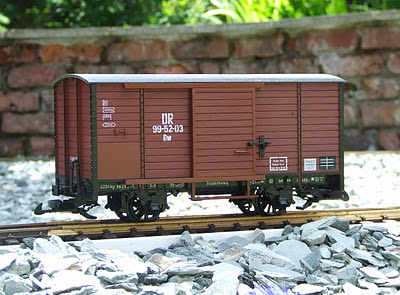 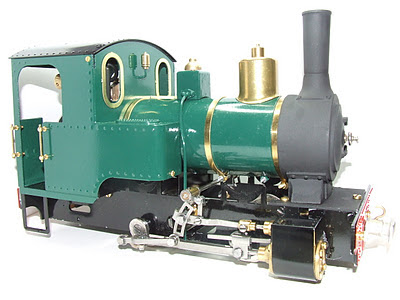 The cab roof was painted with Halfords black gloss enamel and then loosely fitted to the body with two brass screws and nuts. These provided for the hinge enabling the roof to be opened for access.
Tip - a drop of Loctite was applied to each nut to prevent it from moving. 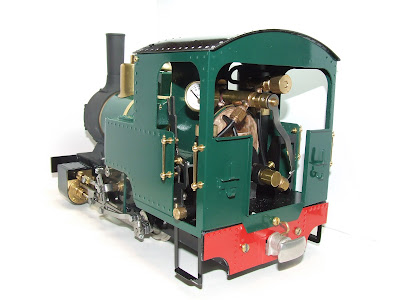 The body was then carefully placed over the gas tank and lubricator and secured in placed with a brass screw, to the rear buffer beam.
A tank support was then fed under the boiler and attached to the side tanks of the body with two brass screws. 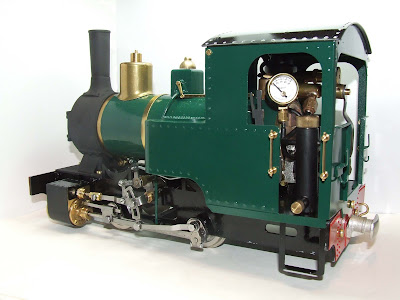 The dummy brass sanding dome was then slotted over the brass screw in the centre of the boiler and secured with a brass cap.
The brass dome just sits over the safety valve assembly. 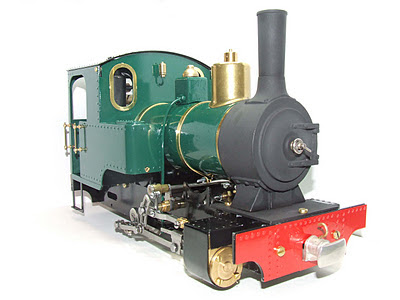 Before the body was fixed in place, all copper pipes and the lubricator were painted with matt black Halfords V.H.T. Engine Enamel paint.
Next stage, fitting of the Radio Control.
Posted by The Controller on Monday, October 31, 2011 2 comments:

The 11.75 mile journey takes approximately one hour in each direction between Aberystwyth and Devil's Bridge but on this particular day, sadly no trains were seen running.  However I did manage to take some 'bits & pieces' shots of the railway.
Posted by The Controller on Tuesday, October 25, 2011 No comments:

Train for a Laugh

Posted by The Controller on Friday, October 21, 2011 No comments: 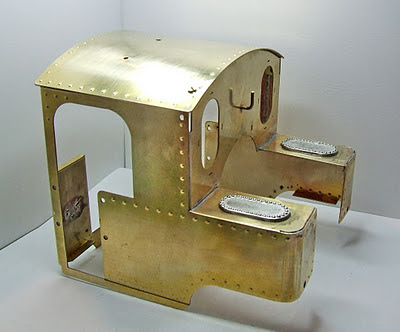 The body is first shown here after folding and soldering of all tags.
Soft solder was applied with Bakers No.3 soldering flux using a small butane blowtorch (the type/size used in the kitchen).
Warning - The brass will get hot and therefore I recommend the use of oven gloves or similar.
Tip - Whilst soldering, I used a small piece of chamois leather to wipe and smooth out the solder prior to it setting.
The dummy tank fillers were glued in place with araldite and then left 24 hours to set. The whole body was then gently rubbed down with fine grade  wet and dry paper. 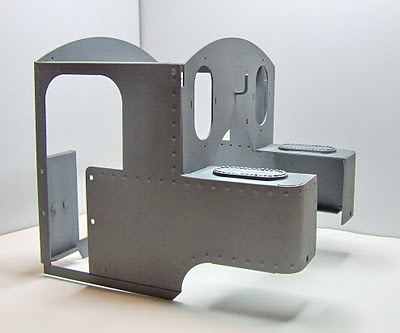 Again, I applied Isopropyl alcohol cleaner with cotton wool balls to remove any flux and oil residue, followed by a hot water and detergent bath. The body was then dried using an electric hair dryer.
The body again was sprayed with one coat of etching primer and two coats of Halfords grey enamel primer.
Not shown here, but the roof was also prepared as above.
Left for 24 hours before the cab was sprayed four coats of Halfords Racing Green enamel. 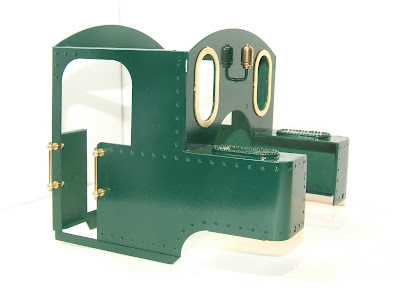 After a further 24 hours, the dummy whistle, spectacles and handrails were fitted.
Tip - to secure the handrails, a drop of Loctite 601 was applied to hold them in place.
Next stage, fitting the cab and roof to the chassis.
Posted by The Controller on Monday, October 17, 2011 No comments: 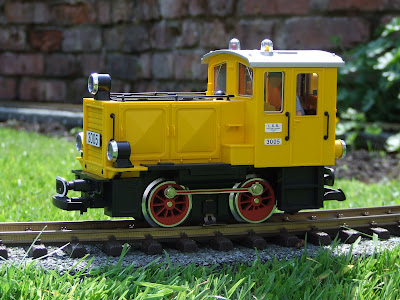 Originally included in MTS Starter Sets, this little switcher has six directional lights, two flashing roof lights and one cab light. Until I added a little plasticine, its pulling power was a little weak but now with the additional weight, it's strength has increased. 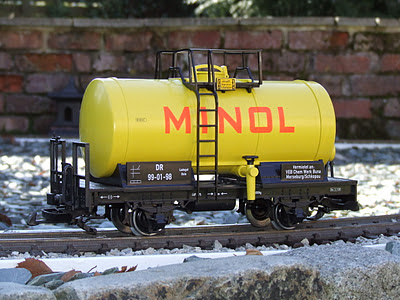 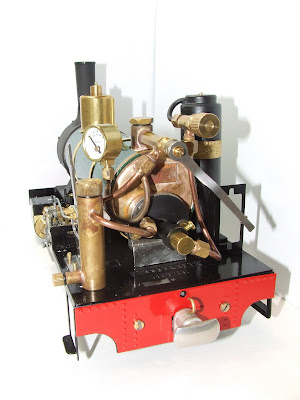 Once painted the floor was fitted to the chassis. To do this the rear edge had to be flush with the rear buffer beam and the hole in the frame spacer had to be visible through the hole above the etched ROUNDHOUSE logo.
The additional two boiler bands were loosely fitted on either side of the sandbox until the boiler was refitted and the cab positioned.
The boiler was refitted and the temporary floor spacer, fitted earlier, was removed.
The gas tank and burner were replaced and the pipes reconnected.
The reversing lever was fitted to enable manual operation until the radio control is fitted.
The lubricator was refitted and positioned centrally above the cab step, with the drain screw slightly overhanging the cab floor.
Next stage, the preparation and painting of the cab.
Posted by The Controller on Saturday, October 08, 2011 No comments:

The First Day of Autumn

As Autumn begins the garden railway season draws to an end for another year. So to keep the memories alive, I've put together this little video of my coal train that I featured here on my blog earlier this year.
Posted by The Controller on Wednesday, October 05, 2011 No comments:

Email ThisBlogThis!Share to TwitterShare to FacebookShare to Pinterest
Labels: Videos

Posted by The Controller on Monday, October 03, 2011 No comments: