Continuing the trackbed construction of 2009, the track was laid as follows: 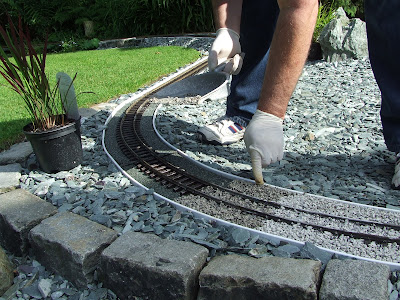 With the trackbed in place, the track and ballast was laid.

The track was laid without pins with each section joined together with a small 'blob' of LGB Graphite Lubricant (51010) squirted into each open fishplate.

Using 6mm limestone chippings as ballast, the ballast was laid in and around the track to the same depth as the sleepers and the surrounding edging strip. Any surplus or proud ballast was carefully removed.

With a fine garden hose the ballast was washed and the limestone residue wiped from the rails.

I have found this method of track laying to be both economical and realistically effective. Once the ballast was laid, the track became more stable on the trackbed. 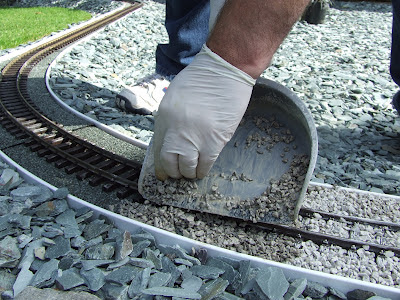 Posted by The Controller on Wednesday, February 22, 2012 No comments:

The renaming of Billy

The nameplates are now back from the etchers and were etch primed last week. They have still to be undercoated and finish painted, together with the normal finishing process. This may take about a fortnight.

In the meantime, any guesses of what Billy's new operating name will be?
Posted by The Controller on Tuesday, February 21, 2012 4 comments: