Posted by The Controller on Friday, November 15, 2019 No comments:

Purchased from IP Engineering with inspiration from The Goose, HLR instructed their workshop to create a unique railcar for their passengers.

Using the assembly instructions as a guide and with a little tweaking, HLR commenced the work order, late summer 2019. 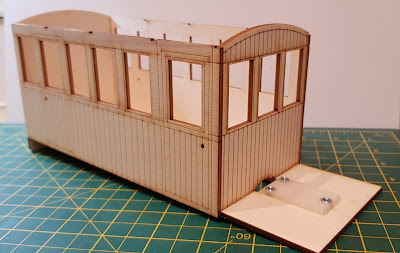 Using Super 'Phatic glue for the wooden parts, the car walls were built and fixed to the floor.
The internal cabin partition was added, together with "coffee stirrers" as floorboards. This not only looked better, but added a little weight to the model. 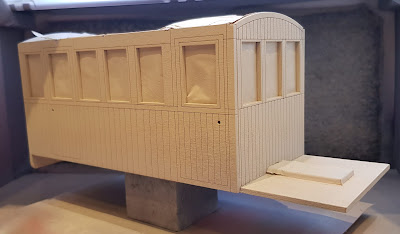 Then off to the paint shop for a two colour paint job.
Using Vallejo Model Air paints, the inside was masked off before a layer of light primer was applied. 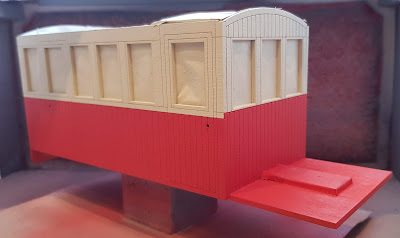 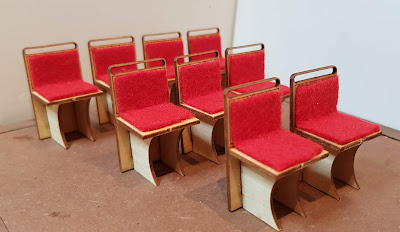 Whilst the paint was hardening the seats were constructed. The kit comes with plenty of seats but all very wooden. I therefore added some red felt to give comfort to the passengers. 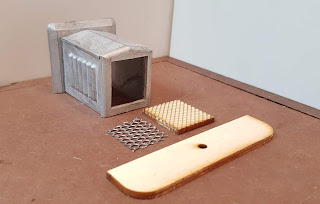 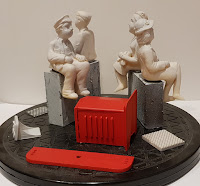 The engine compartment was assembled, metal mesh cut to improve the engine grills appearance and the front buffer beam was painted. Before spraying the buffer beam, six miniature bolt heads were affixed to enhance and improve realism.

As I wouldn't be using the electrics included in the kit, covers were added to the switch locations on each solebar. 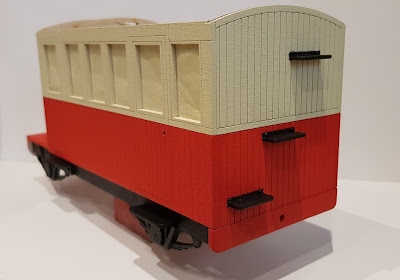 Steps were painted black prior to being added to the rear panel. Again miniature bolt heads were added. 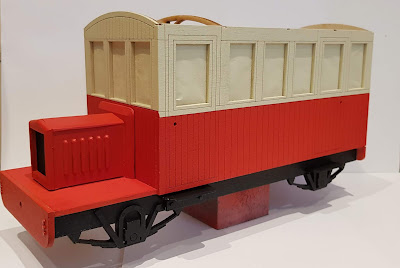 The external walls were all satin varnished before the masking tape was removed from the roof.

It was now time for the passengers to take their seats. Using Epoxy resin, their "bums" were permanently fixed to their seats. No getting off as once the roof is on, it's on for ever!

Mrs Black and Miss Brown sat opposite each other at the back so they could catch up with all the gossip since they last met. They were going away together for just two days, with their bags packed and placed on top of the railcar by the station's porter prior to departure.

Like most days Mr Hall travelled to town to the local Costa for a skinny latte, extra hot, and a read of the daily papers.

Unless he's on holiday, Bob is always the driver on this route.

After all were sitting comfortably the roof was fixed in position using IP Engineerings roofing jig.

Using Fosworks electronics, each component was loosely put in place to check for best fit.

Once I was happy with the electronics, wooden strip panels were affixed across the electronic components. They were all loose fitted apart from the switch and the battery charge point. 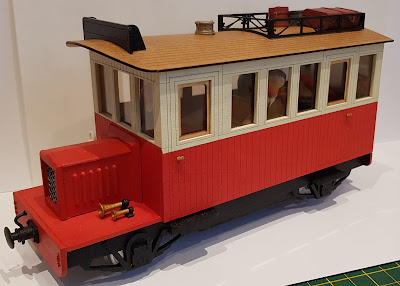 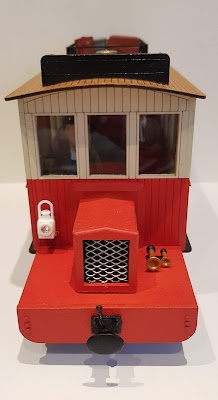 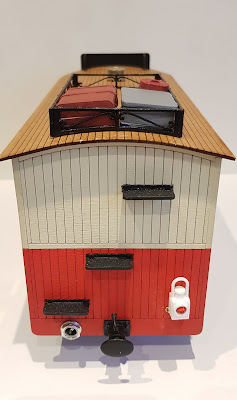 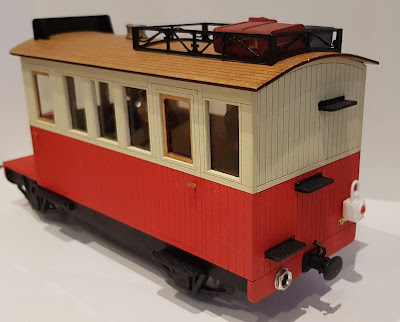 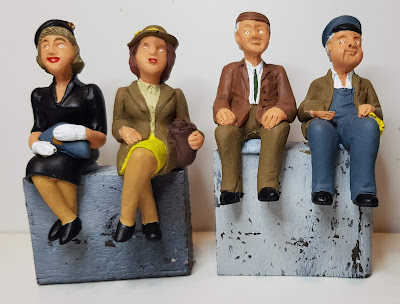 Waiting patiently for the new HLR railbus to leave the workshop, here are Mrs Black (F502), Miss Brown (F511), Mr Hall and Bob the driver, all from the Modeltown range of figures.
Posted by The Controller on Monday, October 21, 2019 1 comment:

Email ThisBlogThis!Share to TwitterShare to FacebookShare to Pinterest
Labels: Figures

With the first loop virtually complete, it was time to lay the foundations for the second loop (Photo 7).


As this was much higher at the front edge due to the slope of the land, a third layer of concrete bricks had to be laid (Photo 8).

Timber half logs are added to complete the front edge (Photo 10).

After the initial straight had been laid, the beginning of the curve was created. Similar to the blocks but now I used concrete bricks to help shape the bend. They were placed laterally.
An alpine bed was created in front of the blocks to help soften the appearance whilst creating a  miniature landscape. Half log rolls were attached to the blocks. Not everyone's cup of tea but only time and weather will tell if the final appearance works.

Bit by bit the blocks, track and alpine bed started to take shape.

Posted by The Controller on Tuesday, January 22, 2019 No comments: