Mid March and the worst of the winter weather had passed. This is my canvas for the new Homestyal Light Railway. Two round axis markers were dug to help calculate the radius for the two ends of the layout (Photo 1).
The basic layout shape was scribed into the existing grassed area using a spade to a depth of approx. four inches. This was to be my outline during it's construction. The layout consisted of a loop and cross-over section. The terminal station will be at the front left of the loop, not yet scribed. (Photo 2).
The front straight section was made from concrete blocks with a depth of 140mm, sufficient for a single track line. I decided quite early on to use several construction methods with the idea, in time, to advise others of best method. The blocks were laid on to concrete as I went along, approx. two inches deep with additional concrete laid along the sides to the same depth. Once level and vertical they were left to set before mortar was added to the joints. Some of the joints have wooden blocks added to aid track pinning later. I found "Jenga" to be useful for this exercise. (Photo 3). 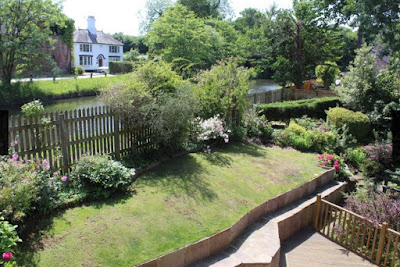 This is where HLR will be created during 2018. Hopefully, weather permitting, the foundations will start to be laid during March. Many changes and ideas are on the drawing board waiting to be created. One of the big changes will be NO track power and LGB locomotives.
Posted by The Controller on Saturday, March 10, 2018 No comments: